If you’re concerned about drawing ever closer to a world where our personal data is constantly recorded and shared, you need to wake up and smell the Orwellian coffee; we’re already there. With Facebook’s multiple data breaches during this past year alone, online privacy is an escalating issue. It’s not just Facebook either – Google recently faced an investigation as well for tracking locations without user consent. While international governments continue to butt heads with the big corporations, see why this alternative gets over 30 million searches a day: Why not to use Google

Think “search engine” and Google is almost assuredly the first company to come to mind. That’s because they established themselves as such, coming 66% ahead of Bing, which is the number two. If a company with that big a monopoly on a function most of us use every day doesn’t even raise even the tiniest red flag, then you need to keep reading.

* This video may contain offensive images; viewer discretion is advised.

You probably already know that Google mines, tracks, and collects your personal data; it’s a big part of how the company makes money. It also means that advertisers can now follow you around the internet. If this is news to you, then now you understand how those banner ads are both so well-targeted and so prevalent. While a good ad blocker can help make some of these disappear, it doesn’t mean the tracking has stopped.

Google’s ad networking is terrifyingly powerful, and is embedded in literally millions of sites and apps. In 2017 Princeton’s WebTAP learned that Google has trackers installed on 75% of the top million internet websites:

Despite how it appears in its presentation, erasing your browser history or using incognito mode isn’t going to make a difference either; that only deletes your local browsing data and does nothing to stop websites (like Google) from tracking you through your IP address.

So what’s the solution?

A solution waddled over in 2008 when Gabriel Weinberg founded a then-little company called DuckDuckGo. DDG describes itself as “the search engine that doesn’t track you,” and that’s been its tagline for the past decade. Unlike Google, DDG will not mine your personal data or keep track of your browsing habits. It sounded too good to be true until we looked under the hood and found out they were actually legit:

What makes DDG tick is that every time you search on it, it’s as though it’s your first time. No purple-highlighted links and no banner ads suspiciously catered to your personal life. “We simply don’t store anything that can tie your searches to you personally,” they assert, “or even tie them together into a search history.” If you don’t believe us it’s all spelled out clear as day in their online privacy policy.

It says they make money with ads!

Yes, that’s because they do. The difference with DDG is that instead of collecting personal data on you to later sell, all they use is keywords. Search up “cooking recipes” and the ads you see will be angled towards it. Look up “Reebok shoes” and you’ll see ads for those. It’s far less disconcerting than seeing ads solely targeting your demographic or location. DDG’s advertising game is also syndicated by Yahoo, and is part of the Yahoo-Microsoft search alliance.

Why people are joining “the duck side” 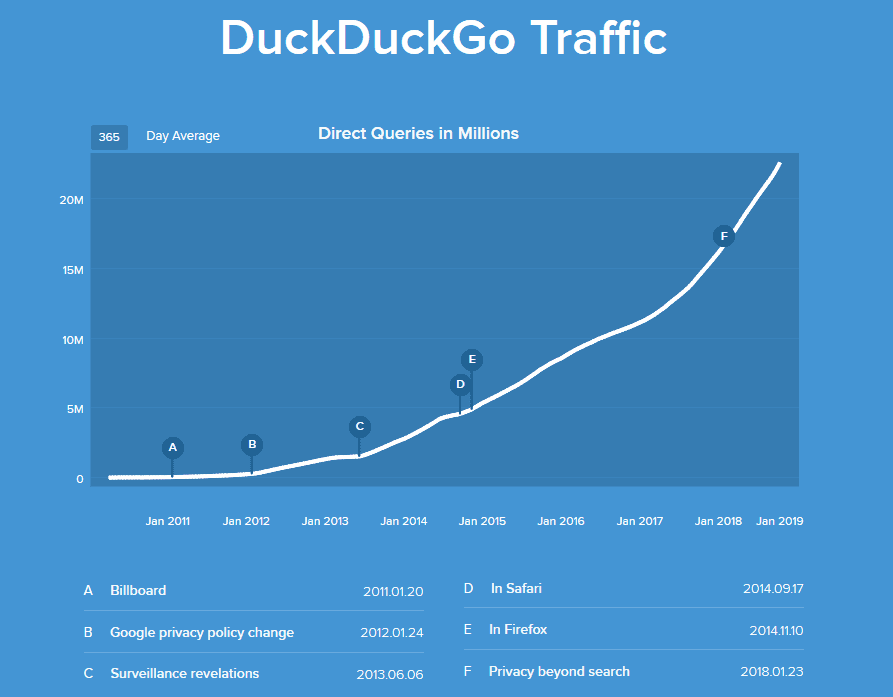 Traffic on DDG has been on the up and up since its introduction, and the increasingly gross mishandling of our personal data has done nothing but spur its momentum. DuckDuckGo recently announced in a tweet that they have finally hit the big 30 million daily searches, signaling that word is finally getting out that people are tired of putting their data into corrupt hands – especially if those hands are careless enough to share it or lose it.

DuckDuckGo fun fact: it took us seven years to reach 10 million private searches in one day, then another two years to hit 20 million, and now less than a year later we’re at 30 million! Thank you all 😃 #ComeToTheDuckSidehttps://t.co/qlSaz4j9ZH

Are you going to make the leap? Is DuckDuckGo going to be your new search engine of choice? Let us know in the comments below, and stay secure out there!