Google entered the browsing wars with Google Chrome for Windows just under a year ago and according to a study by Net Applications, it’s already become the fourth biggest browser out there with almost 2% of the market. Mac fans can now try Google Chrome for themselves although it’s worth noting that this is strictly a developer release meaning some features (such as bookmarking and Flash movies) are not working yet.

This release only works on Intel Macs and is prone to bugs and instability but it’s enough to give you a good idea as to what the finished product will look and feel like. The first thing I noticed about Google Chrome is that it’s unbelievably lightweight. While Firefox was consuming anything from 20-30% of my Mac’s CPU, Chrome barely registered on the scale occasionally touching 3%.

For anyone who’s plagued with Firefox memory leaks and crashes, this alone is surely going to be a compelling reason to give Chrome a go. As you’d expect, Google Chrome also features a type of tabbed browsing which improves on Firefox’s slightly cramped user experience.

Google Chrome is also extremely quick. Surfing the Softonic site, page loads took less then a second and all images were loaded very quickly. YouTube in particular loaded with lightening speed but unfortunately, because the Flash player is disabled in this developer release, it wasn’t possible to test watching videos. 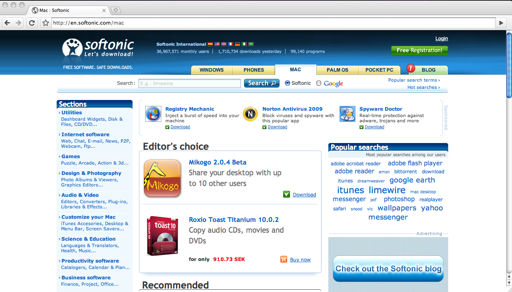 However, sometimes, it simply produced nothing when trying to find the YouTube homepage and maybe this is one of the bugs Google are working on. Overall however, the handling of sites using JavaScript in particular was mightily impressive. I also like the way that when you open Chrome, it displays windows of your most visited sites so you can click on them to go straight to them.

If only there were more extensions for Google Chrome, I’d seriously consider converting when the final build is released. Before that happens though, it will need to get much more popular. Based on this first proof, Safari and Firefox may well have a real fight on their hands.